'Work until you die, or die working': Workers strike in Brazil 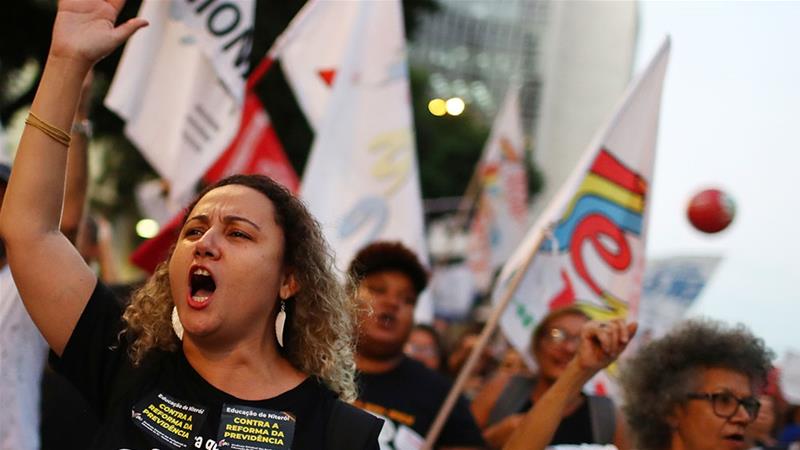 Sao Paulo, Brazil – Thousands of Brazilians brought services in several cities across the country to a standstill on Friday after launching a national strike to protest against President Jair Bolsonaro’s pension reforms proposal.

Early in the day commuters found themselves stranded in front of closed gates at metro, train and bus stations across the country. Papers taped to the gates of banks, schools and shops, warned a strike was ongoing, as workers blocked roads, office buildings and highway tolls.

As part of the pension reform proposal, the government will seek to raise the retirement age and increase workers’ contributions. The government has said the reforms would generate billions of dollars in savings, and kick-start Brazil’s stagnant economy. But many Brazilians and their unions say the reforms will increase inequalities and hurt workers.

Ricardo Patah, President of General Union of Workers (UGT) told Al Jazeera that a “pension reform is important” but not “as it is being presented by the government.”

“All workers must be treated the same and there shouldn’t be first or second-class citizens,” he said, criticising the current reform’s different rules for military, judges and deputies.

“Brazil doesn’t deserve this level of disrespect against workers,” he added. “We didn’t vote for Bolsonaro but he was elected democratically and is now on his hands to give us a different country, a Brazil without corruption, with jobs and opportunities.” 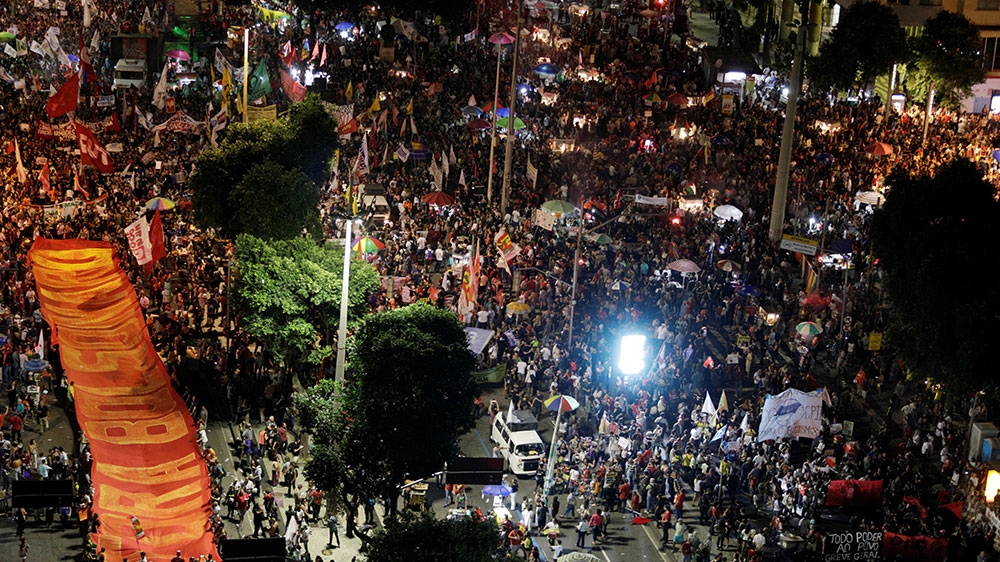 The strike was organised by dozens of unions and left-wing parties.

It caused disruptions and some violent clashes across the country. In Rio de Janeiro, a group of protesters blocking a road were run over by a car, in Sao Paulo tires were set on fire to block some of the city’s main avenues and police fired tear gas and rubber bullets against a group of students on strike.

Also, in Sao Paulo, thousands of those on strike gathered in the city’s centre, wearing t-shirts with the face of former President Luiz Inacio “Lula” da Silva, or pins that read “Bolsonaro out”.

‘Work until you die, or die working’

Marcio Pereira de Souza, a 58-year-old history teacher, held a sign reading “work until you die, or die working” and, like many of his colleagues there, wore a sticker saying “professors against the pension reform”.

“If the age of retirement increases, people will have to work until much later, like teachers will have to spend 40 years in a classroom, that’s not right,” he told Al Jazeera.

For him, the current pension reform only benefits “the big banks and companies, but not the workers”.

Although under the proposal, the minimum retirement age for teachers will remain 60 for men and 57 for women, many say the age is only a technicality and other changes will force teachers to stay in the classroom longer. As part of the proposal, workers will have to contribute at least 20 years before they can retire, but can only receive 100 percent of their pensions after 40 years on the job. For a teacher, that would mean starting a career at the age of 20.

Silvani Moreno, also a teacher, said she has worked for many years but just started as a teacher. The 42-year-old told Al Jazeera that under the new rules she expects she will have to work “much beyond 60” while working under the “massacring conditions teachers face inside of schools”. 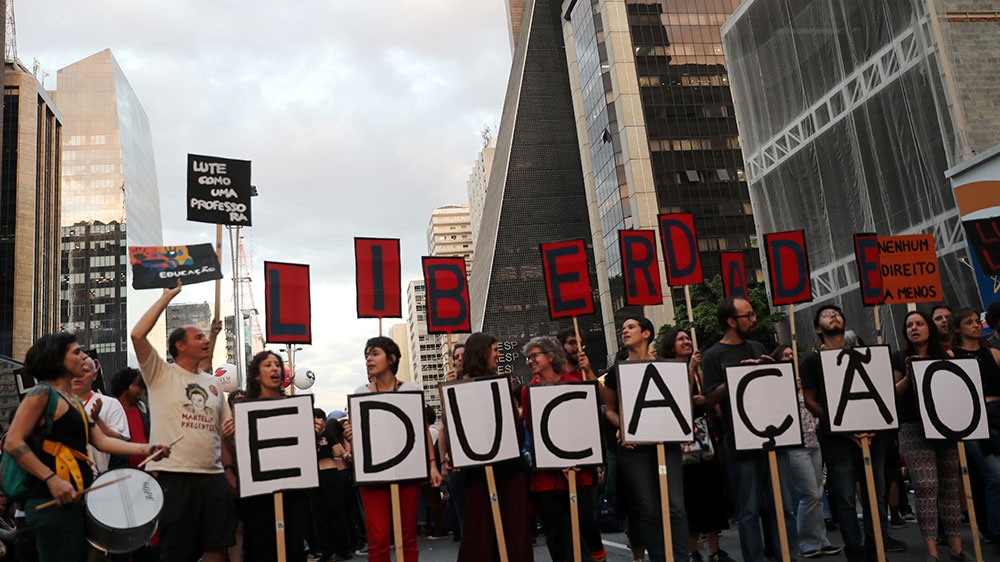 “[The pension reform] harms me, my family, my friends. It harms everyone,” she said.

During Friday’s strike, Bolsonaro’s supporters used the hashtag “Fire the Striker” to criticise those who failed to go to work, accusing them of attacking employers and the industry.

In a message circulating on WhatsApp, pro-government groups called those striking of “anti-Brazillians”, whose only intention was to “provoke and discredit authorities” through “red propaganda”.