Wuhan sports centre that was a makeshift coronavirus hospital reopens

Wuhan sports centre which was turned into a 1,100-bed makeshift coronavirus hospital is packed with thousands of spectators during its first game since the city lifted COVID-19 lockdown

A Wuhan sports centre which was converted into a 1,100-bed makeshift coronavirus hospital at the height of China’s COVID-19 outbreak has held its first game since life in the city returned to normal.

As many as 7,500 spectators swarmed into the Wuhan Sports Centre last night to watch a basketball game organised by retired NBA star Yao Ming, according to Chinese state media.

The building was turned into a temporary medical facility, known as the ‘fang cang’ hospital, in early February – after the city of 11million was locked down in late January to stop the spread of the virus. 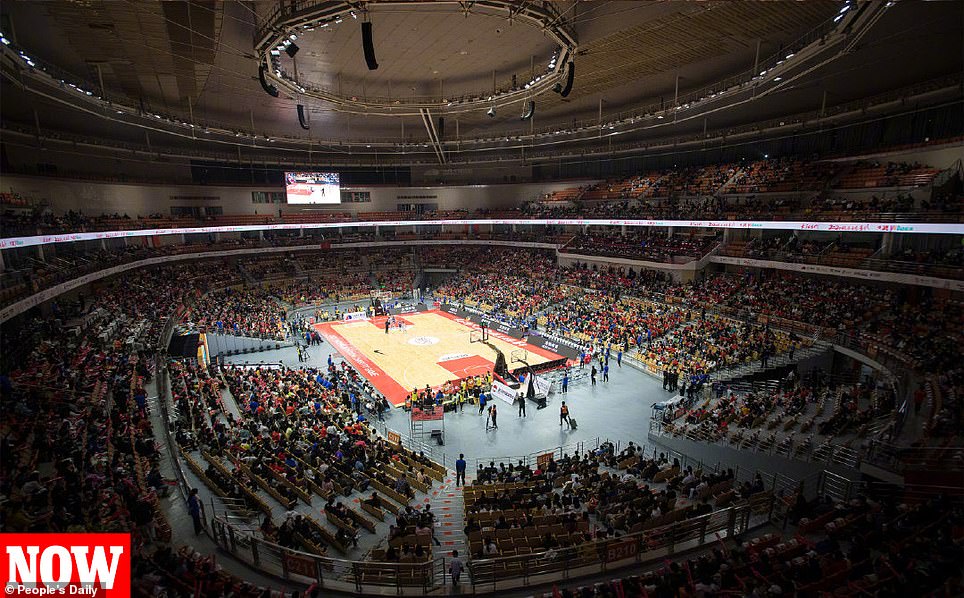 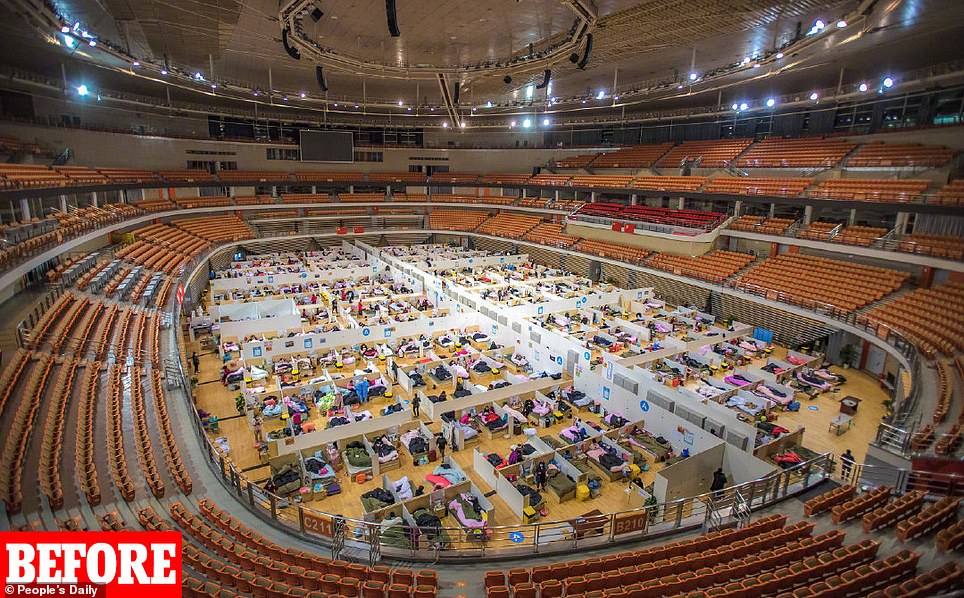 As many as 7,500 spectators swarmed into the Wuhan Sports Centre Sunday night to watch a basketball game organised by retired NBA star Yao Ming. The arena was turned into a temporary medical facility at the height of Wuhan’s virus outbreak 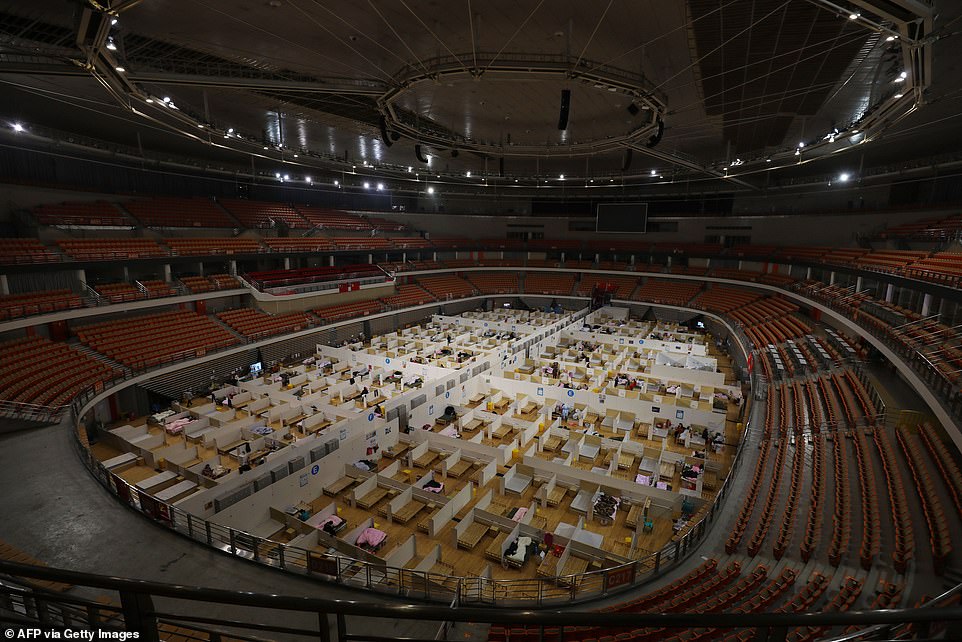 To contain the spread of the disease, the Chinese government built dozens of makeshift hospitals in Wuhan by revamping sports halls, exhibition centres and university buildings. The picture above was taken in one of such centres on March 5

Pictures posted by state newspaper People’s Daily on social media show the contrast of the arena’s interiors during and after the city’s COVID-19 crisis.

The images show the arena crammed with hospital beds in February – when Wuhan was the ground zero of the pandemic – but thousands of enthusiastic sports fans cheering for their stars on Sunday.

The highly anticipated basketball game, called the 2020 YAO Foundation Charity Game, was held to boost the city’s confidence in bringing back its normal life.

Members of the Chinese national basketball team faced off against a special team made up with front-line coronavirus medics.

The former, joined by entertainment stars, beat the latter, assisted by international players who play in China, by 122 to 107.

Hu Jinqiu, a centre of the Chinese national basketball team, said it was his honour to participate in the game.

He told the press: ‘For me, playing against doctors has a particularly profound meaning. I think they are all exceptional because they have sacrificed themselves in the fight of this pandemic.’ 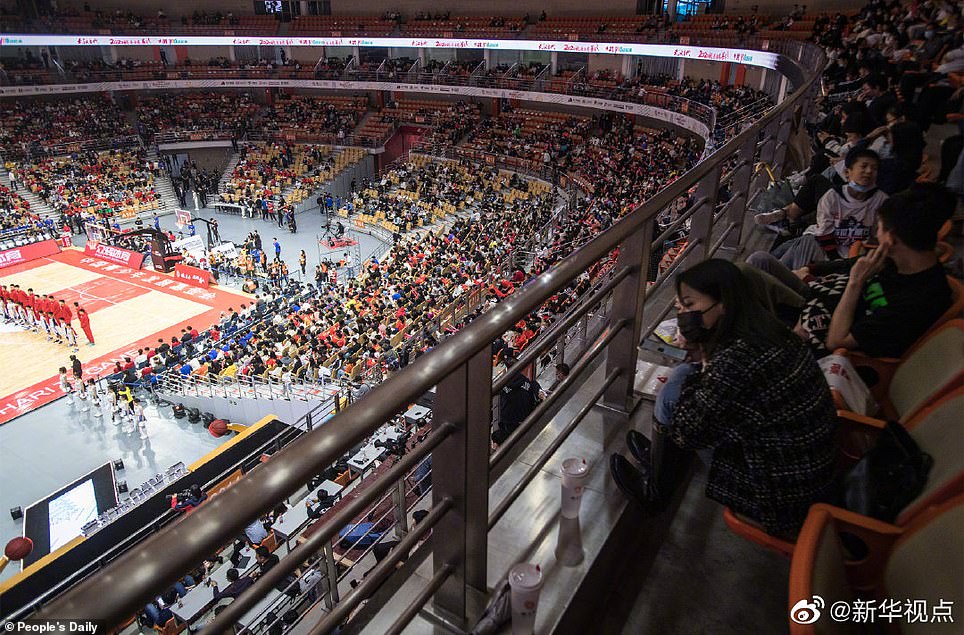 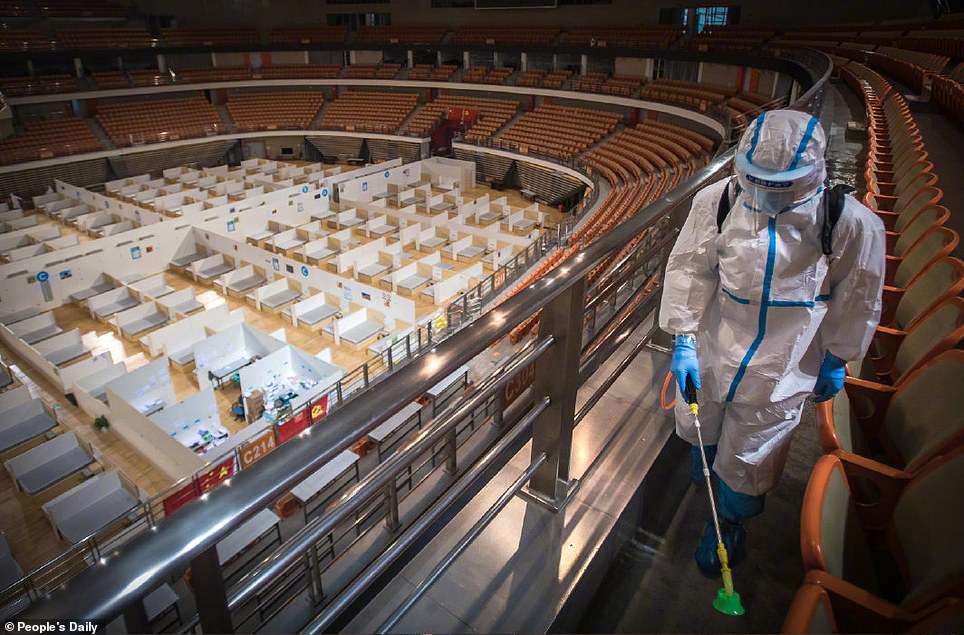 Thousands of enthusiastic sports fans cheered for their national stars on Sunday as they played against coronavirus front-line doctors. The Wuhan Sports Centre ‘fang cang’ hospital reportedly treated 570 patients before closing its doors on March 8 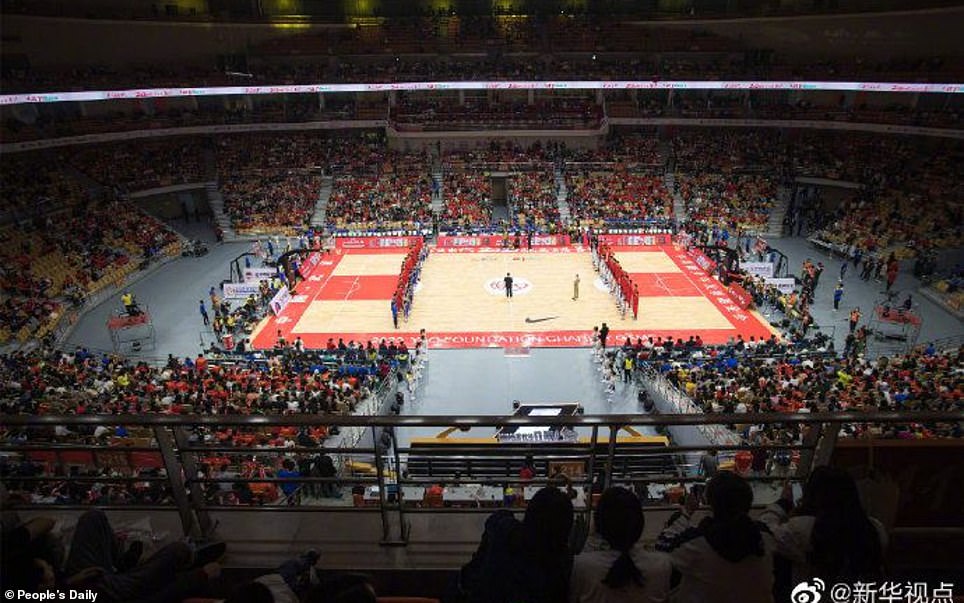 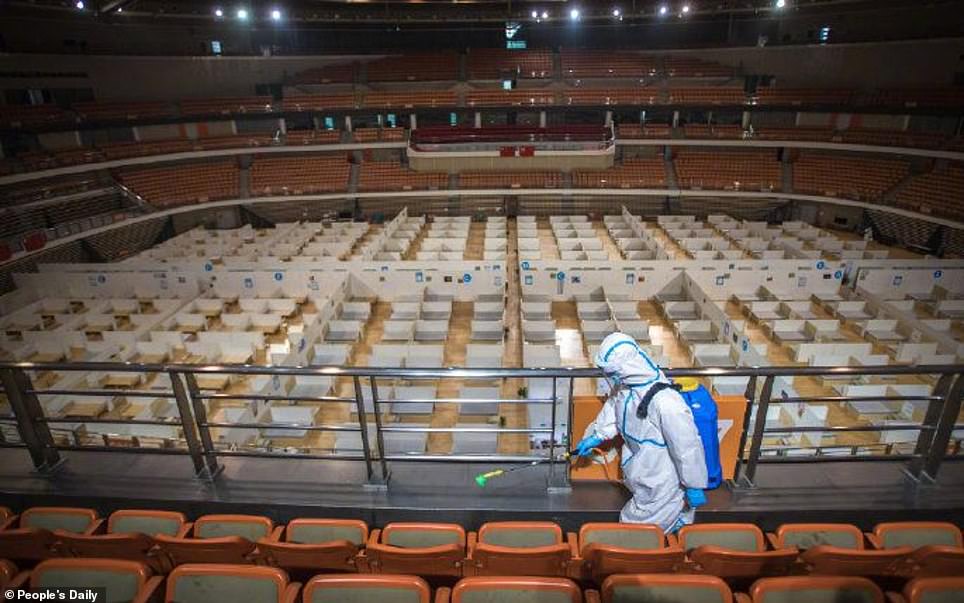 Wuhan yesterday put four air passengers under medical observation after identifying them as asymptomatic coronavirus patients – those who carry the bug but do not show symptoms. They had flown into the Wuhan from Jakarta, officials said 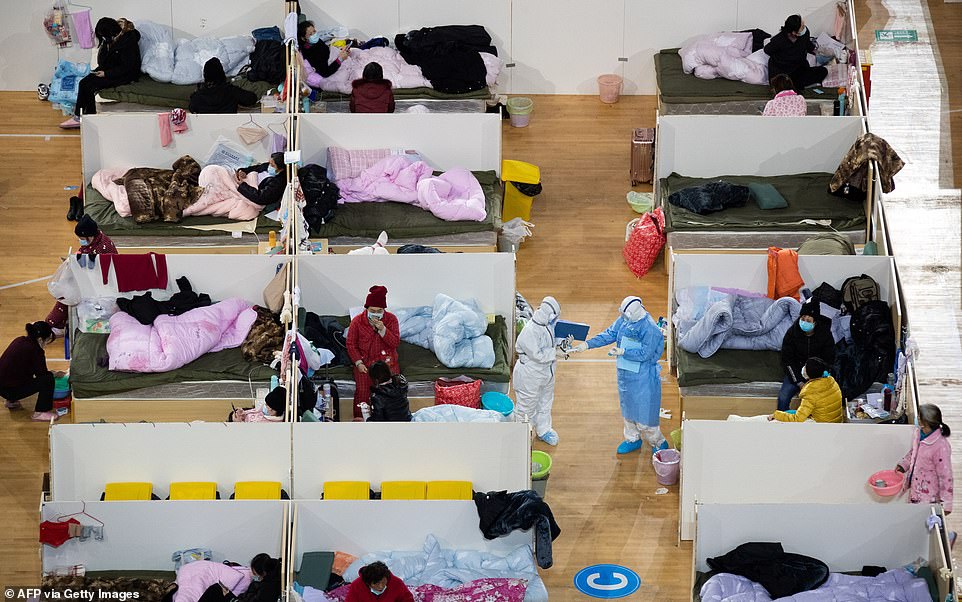 According to the official figures, 85,470 people in mainland China have contracted the virus and 4,634 have died. In the file picture above, medics walk among patients with mild COVID-19 symptoms in a temporary hospital in Wuhan on February 18

The coronavirus was first detected in Wuhan, the capital city of Hubei Province, last December.

Chinese officials put the city under a draconian, full lockdown on January 23 after the virus had quickly spread among its residents.

To contain the spread of the disease, the Chinese government built dozens of makeshift hospitals by revamping sports halls, exhibition centres and university buildings.

By the time the Wuhan Sports Centre ‘fang cang’ hospital was complete on February 5, the coronavirus had infected 10,117 people and killed 414 people in the city.

The makeshift hospital treated 570 patients in the space of 25 days before closing its doors on March 8, China’s official news agency Xinhua reported. 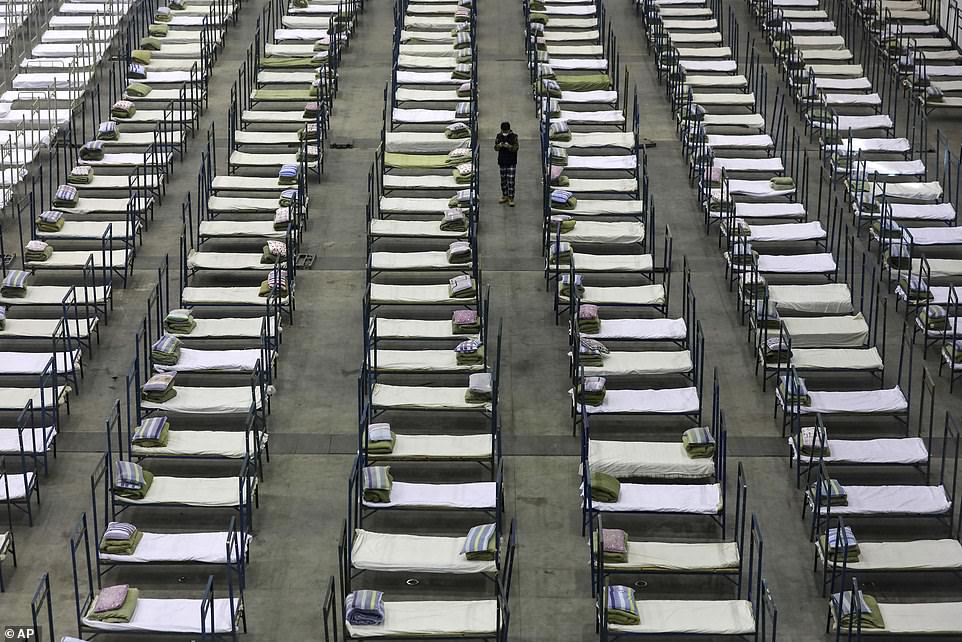 Chinese officials lifted Wuhan’s lockdown in April after more than two months of draconian measures. In the file picture above, a worker walks among beds in a convention centre that has been converted into a temporary hospital on February 4

Chinese officials lifted the city’s lockdown on April 8 – one day after mainland China reported no COVID-related death for the first time since the beginning of the outbreak.

According to the latest official figures, 85,470 people in mainland China have contracted the virus during the pandemic, and 4,634 have died.

Globally, more than 35.13 million people have been reported to be infected by COVID-19 and 1,035,670 have died, according to a Reuters tally.

The news comes after Wuhan yesterday put four inbound air passengers under medical observation after identifying them as asymptomatic coronavirus patients – those who carry the bug but do not show symptoms.

The four individuals had flown into the Wuhan Tianhe International Airport on Friday from Jakarta, and were yet to be diagnosed formally, a statement said.

Wuhan had not reported any regular or asymptomatic COVID-19 cases since August 7 when a Chinese citizen flying from Tajikistan was confirmed to have been infected. 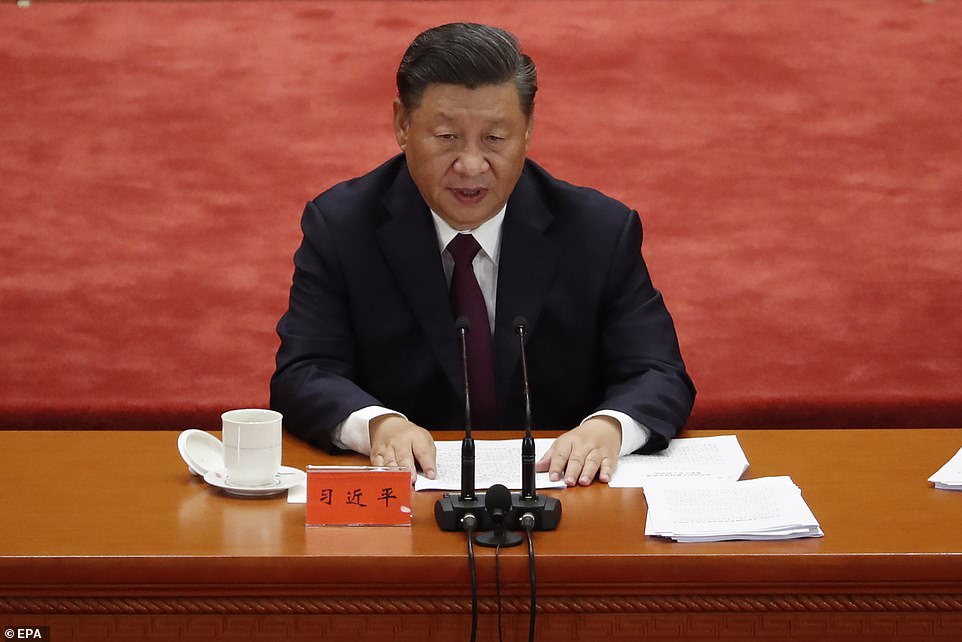 Chinese leader Xi Jinping has praised China’s role in battling the coronavirus pandemic during a televised ceremony in Beijing last month. President Xi is pictured speaking in Beijing on September 8 to hail the nation’s efforts in fighting the virus

The news also comes as hundreds of millions of Chinese travellers are taking their first major holiday this week to celebrate the National Day and Mid-autumn Festival.

The nation is hoping to boost its coronavirus-ravaged economy by encouraging its citizens to take part in ‘revenge travel’, pent-up demand after people had been restricted from travelling for months due to the virus.

Chinese President Xi Jinping last month touted his country’s role in battling the pandemic after facing widespread doubts about his government’s handling of the crisis. Critics have accused Beijing of covering up the true scale of its outbreak in its early days.

The leader claimed that China had acted in an ‘open and transparent’ manner over the contagion while ‘passing an extraordinary and historic test’.

END_OF_DOCUMENT_TOKEN_TO_BE_REPLACED

END_OF_DOCUMENT_TOKEN_TO_BE_REPLACED
Recent Posts
We and our partners use cookies on this site to improve our service, perform analytics, personalize advertising, measure advertising performance, and remember website preferences.Ok